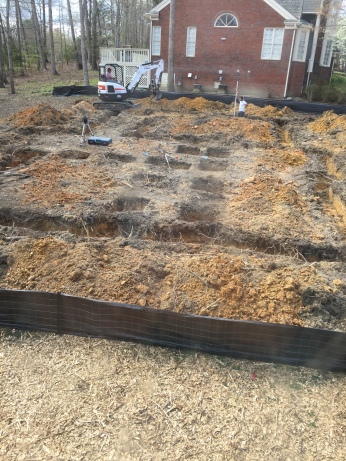 Regret.  Ever been there?

Our daughter lives in the woods.  Trees!  It seemed like a good idea at the time.  But with trees comes a variety of issues.  Yes, there’s the good aspect of shade and beauty.  But that can pale when one encounters what she would classify as the “Durham House-Eating Squirrel”. To her it’s somewhat akin to a breed all it’s own.  Or so she came to think.

And then there were the carpenter ants.  What was left of her house after the squirrels would surely be taken down by those parasitic vermin. Or so she came to think.

And then, just when ya think life can’t get worse…… the voles.  I remember the day I got the phone call.  To be quite honest, I didn’t even know what a vole was.  I had to Google it.

Did you know, these burrowing, tunneling rodents can have 5-10 litters per year, with each litter producing 5-10 baby voles, and quite unfortunately, said babies grow to sexual maturity in a month!  She was convinced that there was probably a colony equivalent to China tunneling their way throughout her yard, even as we spoke.  After doing my research….. I concurred.  The only comfort I could give her was that they were blind.  I thought she’d be more sympathetic.  She wasn’t.

Suddenly the beauty and grandeur of “trees” began to lose their luster.  When one has a bad experience it can begin to affect all of life.  Trees….. who needs ‘em!  Leaves to rake!  Acorns everywhere! And their limbs suddenly become potential torpedoes just waiting to plummet down, quite likely into your baby’s bedroom!  She was living in a virtual time bomb of disaster.  Or so she came to think.

And then it happened!  The wooded lot next door to her had been SOLD!  A house would be built!  And thus…. THOSE TREES WOULD BE COMING DOWN!!!!  I’m not sure I’ve ever seen her happier.  She would call me, almost giddy.  She would talk about the neighbors coming to her (since she was directly next door and obviously the most affected).  They lamented the loss of the trees!   She thought they were crazy.   She actually contracted WITH the tree-nazis to take down 2 or 3 in HER own yard!  Let’s get ‘em down…. let’s get ‘em all down!

Well, the day finally came.  The tree trimmers arrived.  And her nemeses began to fall…. one trunk after another.  And then….. after the deed was done and the land lay bare, a video arrived in my in-box.  She’s taking me all around the area, showing me every stump, practically in tears.  Correction…. ACTUALLY in tears!  And she wailed….. “I THOUGHT IT WAS WHAT I WANTED………”

REGRET.  The sad, disappointed mindset of regret.  As I ponder REGRET, I think it’s often laced with feelings of “I had a lot to do with CAUSING this!”  Regret is a stepsister to poor choices.

But there can also be REGRET when we weren’t even a player.  We were a victim to it all.  It happened. Now what?  We’re left with the pieces to pick up, regroup, and somehow come up with some semblance of a life again — and yet we live in the regret of it ever having happened in the first place.

As I ponder the antidote to regret, the word that comes to my mind is HOPE.  Hope is what will diffuse, dilute, and destroy that life-sucking enemy regret.

But what is HOPE?  And how do we get HOPE?  Certainly within our mindset and culture today, there are any number of things we might set up as “hope inducers”. And there might even be some semblance of satisfaction within their scope,  but will they hold up?  Will they last?

I would argue that there really is only ONE TRUE HOPE.  All else will fail… eventually. And I found a powerful reminder of that this morning as I was reading in the Psalms.

Psalm 75:2  At the set time that I appoint I will judge with equity.

Three things jump out at me as I read that one little verse and  each speaks hope…..

Why would you not put your hope in this One? In HIM, we have reason to rest and trust and wait!  We rest in HIS fairness.  We trust in HIS plan!  And we wait on HIS justice.  Therein is my HOPE!

Regrets?  Sure.  Life’s highway is strewn with them.  And we might even wail a profound “I thought it was what I wanted” occasionally.  But we step back, look up, look around, and go on.  Trees grow back!  Squirrels come back!  Voles are blind as a bat!  But somehow they’ll find their way back to us.  Yet they aren’t “our story”.  God’s written us all a story so much more glorious than all that.  Walk it……… with hope!

4 thoughts on “I THOUGHT IT WAS WHAT I WANTED!”

Raleigh said he was “thinking last night about a new game we could play”! He was pretty excited to teach me the SPECIFIC rules!! #candycity Get lots of candy, take turns putting it on the squares, start eating it when he tells you to!! (PROBABLY not Mama-sanctioned!)😳
The author of Psalm 119 must’ve been an Enneagram 1….. and I’m tracking, v.20, don’t think I’m not!!
My favorite Troyer’s Market date!! Blueberry pick-up✔️ Auntie Ruth’s Pretzel ✔️ It was a very good day!
The culmination of a great week of VBS….. Doe River Gorge train ride and picnic!! So glad Walker got to be a part of it all with GrandMoomie and Mamaw!
Jasper thinks “dog sitting” entails him literally SITTING on my lap!! Good thing he’s adorable! #officedog
Almost home to TN…. and look who’s tagged along!!